We were originally to have spent two nights here but had double booked ourselves on the Friday night and so we set off mid morning on Saturday for the journey to the campsite near  Barns Green,  just outside Horsham. Mum has been staying in the caravan for a few days while Uncle D is on holiday and so we thought a night away might be nice for her. The trip took just over an hour and we received a very cheery and swift check-in.

We had booked pitch 82 (see map) which was next to a camping pod and very near the Cafe by the Lake.  We did wonder if this might be noisy but need not have worried. It was a very pleasant outlook and Paul swung the van round to make the most of the view.  We set  up and grabbed some coffees from the Cafe – which was doing a good trade –  and then sat and relaxed for a while. The rain came and went but was not too bothersome. 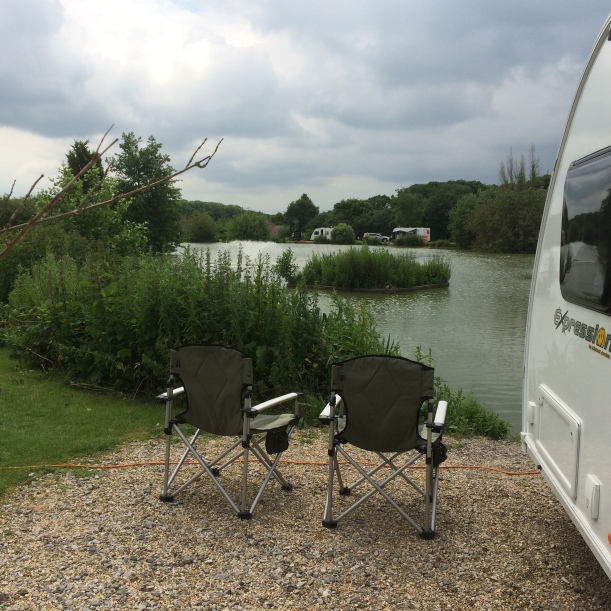 Before the rains came

Our personal island and water feature

The site has a total of 91 pitches but does not feel crowded. It is quite family orientated, with a good play area and a cute little train for little’uns. We’d definitely bring our two (Lenny & Evie) . Think they’d love it. It is also quite fishing orientated. Having said all that, I’d be glad to return – even though it is not our usual sort of site.

At around 2, we set out for Horsham, where we were scheduled to see a show that evening. We did a little shopping, including some nice new boots for Mr S from a nice little (independent?) shop called Moshulu – the tan ones in this link –  and had a cuppa. We had a table booked at Bill’s at 5 pm and by the time we had finished shopping it was time to find Bill’s and get parked. As Mum was with us, we had her blue badge, which makes parking a simpler matter than usual. 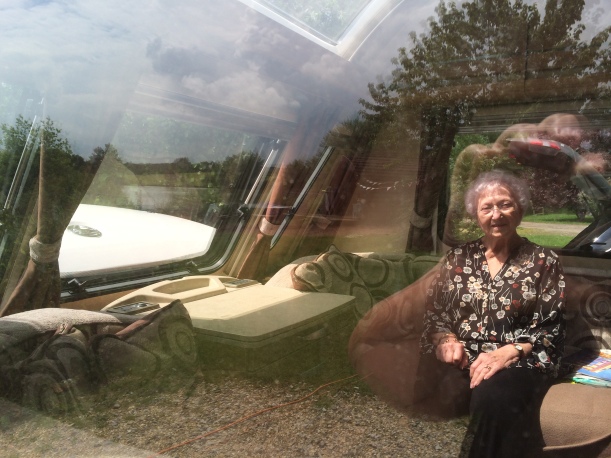 The Cafe by the Lake

We got settled in Bill’s and placed our orders. The service was very good and we had a very nice meal – although possibly a little over-priced? It was not busy and so we finished earlier than anticipated. Also – at the time of booking our table,  I had not realised that the show had an 8 o’clock start, so we had a little time to kill.  We drove around for a while and then made our way to the Capitol Theatre, the venue for the show. The theatre (formerly known as Horsham Arts Centre) is located in an old cinema and has recently been refurbished. We have been to the theatre many times, as an old friend was the Box Office manager there for many years. 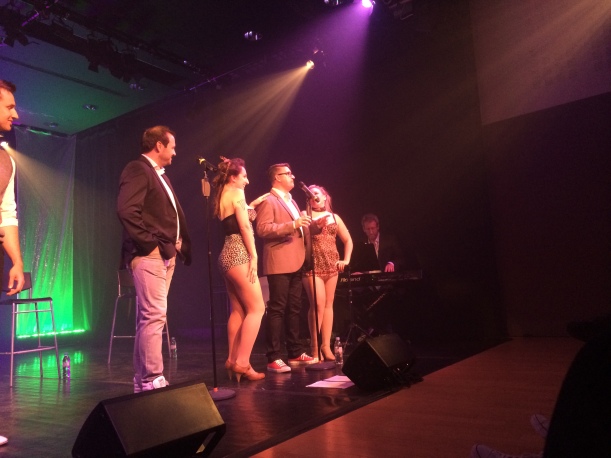 Bersted Boys – with the Berstettes

This same old friend, Michael Gattrell, was actually appearing there tonight as part of “The Bersted Boys” – a male singing trio. It was a great evening and we all enjoyed ourselves immensely. It was good to see Michael in action. We stayed behind for a chat and then made our way back to the cam[site. It was the first World Cup England game and a crowd of people were watching it on a tablet outside the cafe (good free wifi) but they weren’t too noisy. We were relegated to the dinette bed as Mum was in the fixed, but Paul soon had it made up and we had a quiet night’s sleep. The Cafe does breakfasts and it was tempting, but I had brought duck eggs with us and so we all had a good breakfast anyway. We read and chatted for a while and fed the numerous ducks/geese and then it was time to pack up and leave. Just as we were leaving a chap caught a really big carp which was quite exciting!  We had a very pleasant- if brief – stay and we’d certainly return without any question. This time with the dog, who got left behind with George on this occasion (because of the theatre visit) . 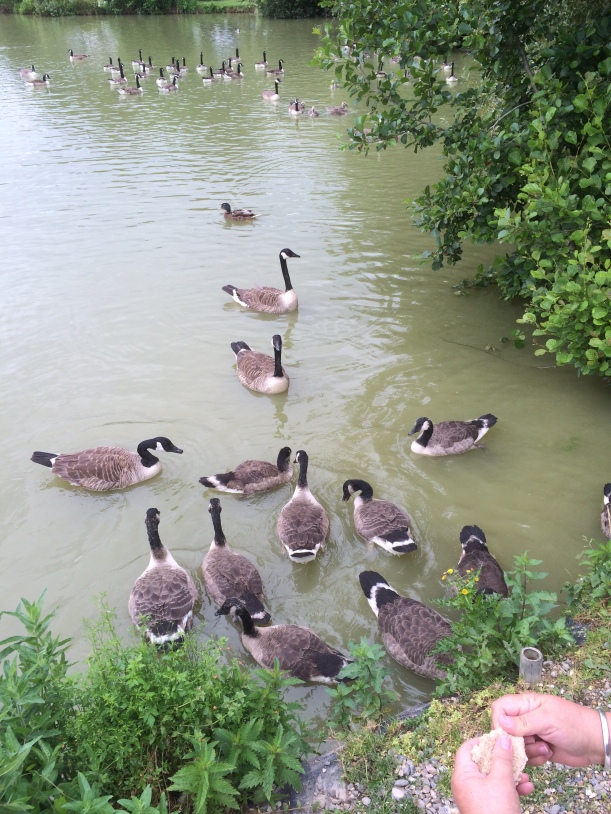 The one that didn’t get away

It had been nearly two years since our last visit to this lovely site, which is in the centre of a triangle formed by Guildford, Dorking & Cobham. It’s prime commuterville and yet still quite rural. We were meeting friends for a trip on the River Wey navigation. Last time we were here, our van was pristine and now he (Mr Munsch – Eddy to his friends) is almost 2 years old. Still looking good though.

We set off at around 4pm for the approximately one hour journey to the site and arrived to find we had – as we hoped – a pitch next door to our friends, Bob & Barb – the Shorters.  Regular readers will recall that we met them on our Canada trip (the subject of a separate blog – see here) and have met up with them and camped with them on quite a few occasions now. It was lovely to see them and Barb soon had the kettle on. We had an initial catch-up and then it was time to set off for our dinner venue.

The lake at Horsley C&CC Site

We had two dogs with us – Archie and his brother Freddie – and I had booked a dog-friendly pub (very near where we bought Mr Munsch) called the Gomshall Mill.  And very nice it was, too. Some nice beers and some Westons “Old Rosie”  cider – which slipped down a treat.  The food was good and the chat flowed freely, as did the beers for those who were not the nominated driver (me, as usual!).  Around 9 o’clock, they dim the lights in the pub and put large candles on each of the tables. I though that was a nice touch and made it very cosy. I would definitely return. We left around 9.30 and the Shorters came to our van for a coffee and then it was off to bed in readiness for our early start the next morning.

Behaving at the pub

It was an earlier than planned start, as around 05.45 there was an enormous clap of thunder and the rain started. It poured and it poured. Didn’t really get much sleep before the alarm went off what with the noise of the rain and the jackdaws tap-dancing on our roof when it wasn’t raining! We left at 08.30 for the short journey to Farncombe, which is on the outskirts of Godalming – the head of the navigation.  Our boat – Saxon was waiting for us and we loaded up in the dry and had our briefing in the dry. But it wasn’t looking good. There were some amazing and very unusual looking clouds which I think were “Mammatus” clouds – certainly the atmospheric conditions were right for them. There was also a jet black one heading our way and just as the briefing finished and we slipped our mooring,  the first couple of drops hit us. And then the skies really opened. We got a proper soaking! I was wet from head to toe. Luckily, the cloudburst was not protracted and the sun eventually struggled out and then stayed with us all day. 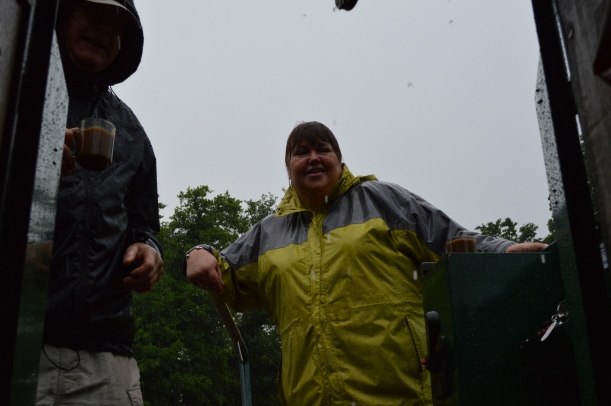 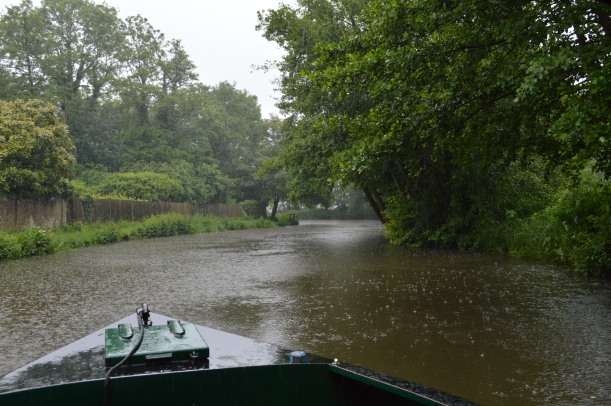 Barb being handy with a rope

We passed through Guildford and its many gongoozlers (canal-speak for those who stand and gawp) and got to the Rowbarge (the limit of our permitted navigation in the Day Boat) in plenty of time for lunch, which we had on board accompanied by beers from the pub. The Rowbarge has recently re-opened after a period of closure and serves real ales – thank goodness, as Bob is a keen real-ale man. Our lunch was a veritable feast and we could barely move as we set off for the return leg of our trip!

On the way back, we stopped at Dapdune Wharf to have a quick look at the Visitor Centre there, which explains the history of the navigation and has a couple of the only remaining traditional Wey barges , which are pretty big, as one of the picture on the above Wey barges link shows! We also had a stop out in the countryside for a cream tea – which we just about had room for.  Bob had turned out to be a natural at the helm and Barb proved her worth as a rope handler. We had a great day and all felt relaxed and tired as we piled back into the car and back to the campsite. 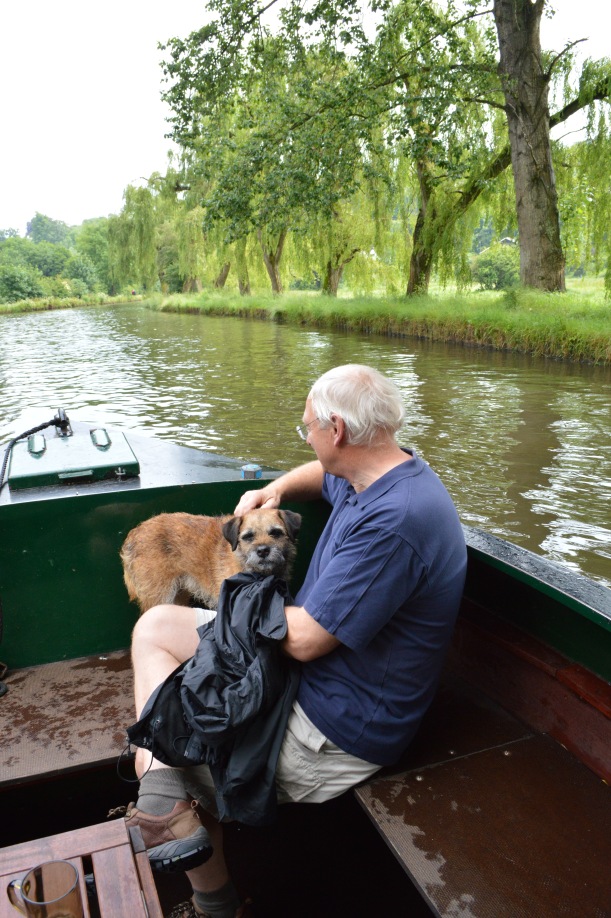 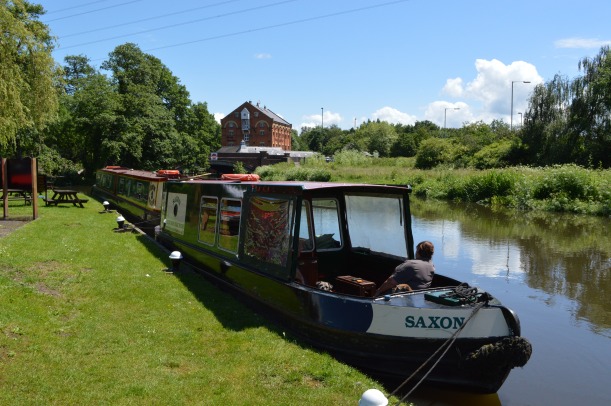 Waiting for a lock 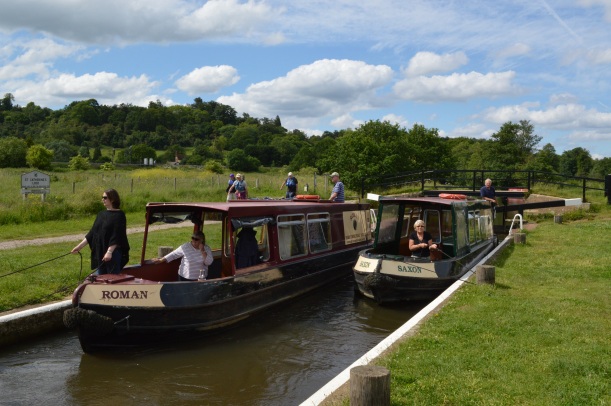 Bob at the helm 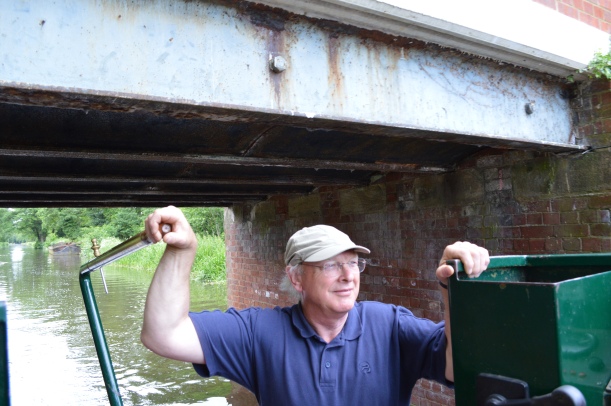 We spent the evening chatting and had a reprise of lunch – well you don’t want to risk hunger pangs in the night, do you? This time it was accompanied by gin and tonics.  We sat out in the warm evening air until it was too dark to see each other and then went our separate ways. The dogs had not moved all evening – they, too, were tired after their exertions.  A lovely day was had by all and we’d thoroughly recommend a hiring from the very friendly people at Farncombe Boat House.

We slept like logs and woke up to find that Sunday morning was sunny and we did more sitting and chatting and then it was time for us to quickly pack up and leave. We were very envious of of Bob & Barb. who both being retired were staying another night. SO – next? A trip to Horsham with Mum, who will be staying in the caravan for the next week and a half while my Uncle has a well-deserved break.. We’re off to see an old friend and his mates singing at Horsham’s Capitol Theatre and will be staying over night in the van at Sumner’s Ponds campsite. We’ve decide to take a Sharpie and amend all the signs we can find!