Our last trip of 2014 and, I suppose, the first trip of 2015!  Leaving was a little more haphazard than usual, as we were also saying goodbye to family, who had been staying for Christmas. It was a beautiful day and we had a pleasant drive to our site, which was located roughly half way between Taunton and Dulverton on the edge of Exmoor. The village’s name (and indeed, the campsite’s name) is Waterrow and it is on the westernmost edge of Somerset’s border with Devon.

Waterrow Touring Park is an adults only site (our preference) and we liked it the minute we arrived. It’s one of the “Tranquil Parks” collective, which we love – very rural and quiet, with lots of wildlife. We had a fully serviced pitch (our preference, especially for a longer stay) and we were soon hooked up and warming up with a cuppa. It was starting to get very chilly but we had a snug and cosy night after our curry, courtesy of Sainsbury’s. Some people had obviously spent Christmas here too and had decorated their vans. Very pretty. 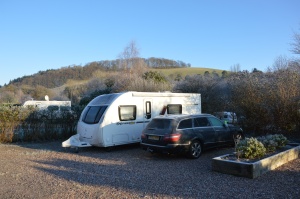 The next day, we woke up to a winter wonderland – not snow but the heaviest frost so far this year. It was beautiful, with the sun glistening off all the frosty branches. It was, apparently, the coldest night of the year and all our external pipes were frozen. Luckily, the shower block was close and well-heated and we had soon showered and broken our fast. We resolved to remove all external pipes/hoses and bring them indoors, so that we would have a better chance of not freezing overnight again. We also brought our 5 litre water container into play as a source of tooth cleaning and kettle boiling water. The site had mains water and also its own spring which was lovely, with a bright, lively taste. I kept a fresh bottle by the bed during our stay. 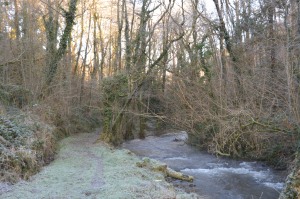 We had a grocery delivery to pick up (Waitrose) in nearby Wellington and made our way there through the delightful country lanes. Somerset is a beautiful county, all the more so in its winter wardrobe. The frost stuck around all day, even in the bright sunshine and it was obvious that there was to be another frosty night. We would be better prepared this time!

Other than pick up our groceries, we did not have much planned as we both need a rest after our Christmas exertions – 3 days of cooking and entertaining plus all that being sociable had taken its toll! We had lunch back at the van ( a feast of Waitrose delights) and then went out for a drive to the north of Waterrow. There were pheasants everywhere. I can’t actually recall ever seeing such a concentration of them. and they are bonkers, running around madly when they hear the car approaching. Sadly, there were quite a few quite a few squished ones on the main roads, but they were in no danger from us. The lanes were winding, narrow and often icy, so we were taking it nice and slow. We now have an entire library of pheasant pictures! 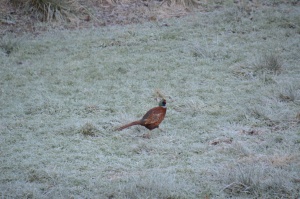 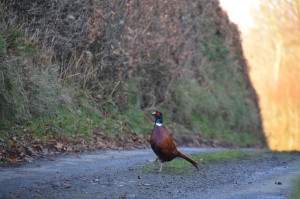 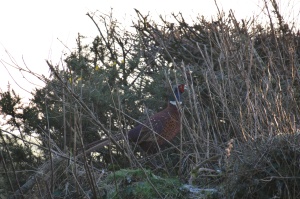 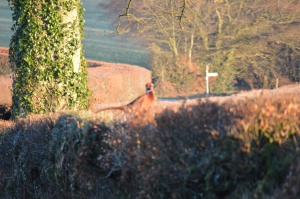 It was an equally cold night and another beautiful day dawned – no problem with water this time – although we still had to shower in the block rather than the van as 5 litres doesn’t go very far! We had a trip to The Donkey Sanctuary near Sidmouth planned and the weather looked perfect. It was cold, but there was no wind to add chill factor. It was about an hour’s drive from where we were staying and again it was another pretty drive.

We arrived about midday and spent a very lovely 3 hours there. The donkeys are adorable and I wanted to take each and every one of them home. One day! It was nice that dogs are made so welcome there. We are often barred from “visitor attractions” because we always have Archie with us on our caravan trips. I knew he’d enjoy it too, as he is always very interested in horses/donkeys – in a good way! We now have an entire library of donkey pictures! 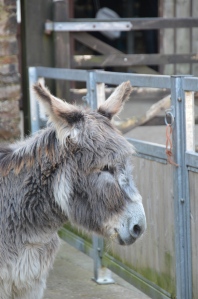 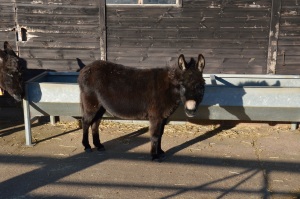 The light was beginning to fade so we had a quick drive round Sidmouth before making our way back home. The weather forecast showed a warming up tendency and there was no frost on New Year’s Eve.We liked the look of the town. It had lots of interesting independent shops and eateries. Worth another visit some time, certainly. 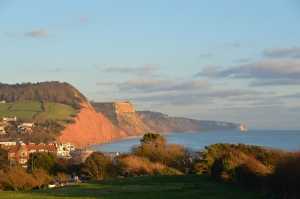 The cliffs at Sidmouth

New Year’s eve dawned and the frost was gone. We could shower in the comfort of our own home at last. Lovely. We were to explore Exmoor today. Not the best day – a bit gloomy but never mind. Another nice drive and our our first port of call (literally?!) was Porlock Weir. We had visited there before with our old buddies, Paul and Sue Rogers and Archie’s brother, Freddie. It was a lot wamrer that time!! There was a chilly old wind today and although it was actually warmer, the cold wind made it seem much chillier than the day before. We were planning to do the 21 mile Scenic Loop. which was a figure of 8, taking in Lynton & Lynmouth and the Valley of Rocks. The drive started in Brendon and we made our way there via the infamous Porlock Hill. where the road climbs approximately 1,300 ft (400 m) in less than 2 miles (3.2 km) up onto Exmoor. It’s  a very steep hill with gradients of up to 1 in 4 and hairpin bends. We like!! On the way we saw a small herd of Exmoor ponies. So beautiful. 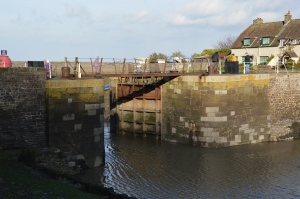 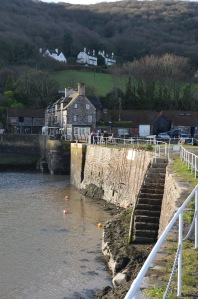 We stopped in Lynmouth – the lower of the two towns for a walk around and a light lunch and then pressed on round the loop. We timed it very well (luck!) to see a steam train from a recently restored section of the Lynton & Barnstaple Railway pulling in to Woody Bay Station. Much excitment! Whilst we had visited Exmoor before, we had never been to the Valley of Rocks and were very impressed. Quite spectacular. 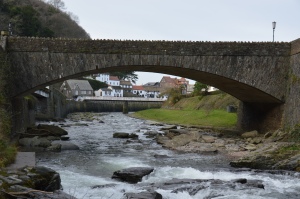 We returned to the caravan for a cuppa and a snooze and then to get ready for our NYE dinner at the The Rock Pub in the village. We recived a very wam welcome, with a roaring fire. The food was very good and we had a pleasant evening.  There were very few fireworks so Archie had a very calm time, which was a big relief.

New Years day was quiet. We had a late and unhurried breakfast and then popped to Taunton for a quick bit of shopping (mainly me) and some bread and then had a largely lazy remainder of the first day of 2015. We were off home tomorrow with a filthy car (muddy lanes) and a filthy caravan (road spray) but we had a very nice break and I suspect the “twixtmas” (awful!!) break in the caravan will become a permanent fixture.

I’ll end with the 2014 stats. We spent a total of 35 nights in the van – over a month if you look at it like that. We stayed in 12 different counties and 2 countries. We went on a ferry to the IOW and (shh) we bought a new caravan for next year, which we are picking it up – weather permitting – at the end of February. We hope to have one more trip away in Mr Munsch, which we have loved dearly and which has been thousands of miles with us. Sad to be saying goodbye but it’s time to move on to what we hope will be our ideal van.